Wake up to new ideas

The Wayne County Area Chamber of Commerce is trying something new.

About 40 people showed up Thursday for the first Chamber Network Morning from 8 to 9:30 a.m. at Arbor Trace in Richmond.

The event was designed to provide an alternative to the long-running Chamber Network Night, which typically happens once a month beginning at 5 p.m.

“A lot of people requested it,” said Amy Holthouse, chamber president and chief executive officer. “We’re trying to work it in once a quarter.”

“I usually have commitments in the evenings that conflict with these chamber events,” Bourff said Thursday. “I have had a great time connecting with people that I don’t normally see.”

“I was really excited to have it first thing in the morning,” said Donna Kay of Solutions Unlimited. She said she finds the morning meeting easier to work into her schedule.

Ron Whittaker, general manager at Richmond Toyota, agreed. “Sometimes it’s easier to get here first thing in the morning than it is to break away in the evening,” he said.

“I think it works especially for younger parents,” said Linda Watson of Adamson LLC, accountants and advisers, reeling off a long list of family commitments likely to be faced in the evening.

“I love the morning idea,” said Marta Sebastian, who is self-employed.

“It’s a good opportunity to meet people while they’re fresh.”

The Uptown Innovation Center in Richmond is home to two new tenants and two growing companies — high-tech businesses all.

The newest tenant is Solutions Unlimited, a New Castle information technology and communications company hoping to establish a regional presence.

Donna Kay is in charge of sales and marketing. Donna appreciates the opportunity to “incubate” the business at the Innovation Center.

“It’s a start to see where the business is going next rather than being committed to a permanent location,” she said.

Jason Whitney is executive director of Center City Development Corp., which manages the center. He refers to the tenant businesses as his “partners.”

Center City, Whitney said, is “a sounding board for ideas. We do a lot of referrals, create a lot of connections in the community.”

Donna refers to Whitney as a “walking, talking event calendar.”

Donna’s company also serves businesses. Founded by Michael Dinkins in 1994, Solutions Unlimited has seven full-time employees in New Castle and customers statewide. Its main focus is on businesses involved in manufacturing and health care.Donna sees her role at this point primarily one of networking and establishing a local presence.

“I think business comes in stages and right now I’m in the building stage,” she said. “It’s slow picking up new customers, but I truly believe it takes a couple years to build that trust.”

That doesn’t seem to be the experience of the “older” tenants at the center. Green Filing moved in in June 2012 and Web Canopy Studio in March of this year — and both businesses are booming.

“Next week we should pass $10 million in court fees we’ve passed through the Utah state courts,” he said.

Eastman also has new employees, but they work from their homes in Colorado and North Carolina. Even though Green Filing is a company that reaches all over the nation, Eastman expressed gratitude for the roots he’s been able to establish at the Innovation Center.

“It’s really given us a place to mature into,” he said. Eastman sees the center as an important step between working from home and moving into a permanent office.

Aikin’s business has taken off since he switched from working at home. He said Web Canopy Studio has had more business so far in 2013 than it had in the years 2010 and 2012 combined. According to Whitney, there are five more offices available for lease at the center. He is working with two local leads for companies “that I’d like to add to our building.”

Prospective “partners” must be technology-related businesses.

Steward of the streets 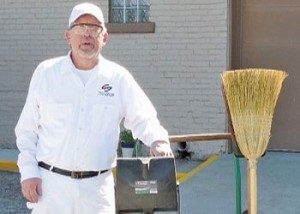 Randy Asberry, known as “Scaffie,” was hired by Solutions Unlimited in June to clean the streets in downtown New Castle. Asberry was employed by the city from 2008-2011 to keep the streets spotless downtown before being laid off due to budget woes. (Bill Hyden C-T photo)

On any day you might see a man wearing a white suit diligently picking litter off the sidewalks and street covers. That man has his job cleaning the streets, thanks to Dinkins.

From 2008 to 2011, Randy Asberry was on the city payroll as a street sweeper, also known as “the scaffie.” He would clean the streets in his usual white suit, white hat and black gloves. Unfortunately, Asberry lost his job with the city due to budget cuts.

“When they changed administrations, I understood because Mayor York talked to me and said they just didn’t have the money,” said Asberry. “However, Michael and others thought they could make it work, so he hired me to start working again at this job seven weeks ago. Michael is a great asset to this community.”

Dave Nantz, owner of Nantz Photography on 206 S. 14th St. in New Castle, said it was vital that someone helped Asberry maintain the downtown streets.

“It’s great to have someone like Scaffie who can help clean up the trash and pull weeds,” said Nantz. “It was so important that Michael stepped up and paid Randy.”

Dinkins’ efforts to preserve, protect and promote downtown do not end at street level, however.

The beauty of the structures in the central hub of New Castle is due in part because Dinkins is also a member of the New Castle Historic Preservation Commission. According to the organization’s web site, the commission oversees and protects architecturally significant structures in New Castle’s historic district.

Nantz is also on the committee with Dinkins and said the NCHPC, founded seven years ago, has assisted in the financing of 22 downtown projects. However, Nantz said the closing of Bella Vita restaurant at 1326 Broad St. hampered additional efforts by the commission to restore downtown buildings.

“That was a big draw and once it closed, we were stuck,” said Nantz. “We know downtown won’t be what it used to be in old stories, but we think it could be beneficial to everyone.”

Nantz said that although Dinkins left his hometown and moved to Cincinnati for a brief time to work, it was a no-brainer to invite him back to the commission upon his return to New Castle.

“He went to Cincy, but found out he could the same things he wanted here,” said Nantz. “We were excited to have him back, but he’d better not leave ever again. Just stay, Michael.”

Brenda Bockover and JoAnne McCorkle of Three Rivers Solid Waste Management, 1121 Broad St., gave thanks to Dinkins for setting up the company’s billing system. According to the Three Rivers website, its mission is to help local governments and businesses meet Indiana’s long-term waste reduction goals and preserve and enhance the environment. The company needed help with modernizing its billing system after moving into the Broad Street location in April 2012 and Dinkins assisted.

“Michael and his employees at Solutions Unlimited do a great job as they are very courteous and prompt,” said McCorkle. “They provided our computerized billing system and that’s how we receive our funding. They also provide us with Internet service.”

Bockover said Dinkins went out of his way to help Three Rivers set up its billing system.

“I used to work for the city years ago and I knew him because he worked there as well. His business used to be just him and one other person, but it grew, which is great for New Castle,” Bockover said. “When we implemented the user fee we told him what was needed and they got this up and going. I don’t know what we would have done without him.”

Donna Kay, an account executive for Solutions Unlimited, wanted to give her boss a happy 47th birthday message on Thursday and shared her sentiments about Dinkins.

“I would say he cares a lot about the community as he was born and raised here and wants to help bring vitality into downtown,” Kay said. “His mission is also to help other businesses become successful by helping them run more efficient through technology.”

Regardless of whether you are a street sweeper, computer programmer, account executive, or a journalist, everyone in New Castle wholeheartedly wishes Michael Dinkins happy birthday because he is about keeping things beautiful. 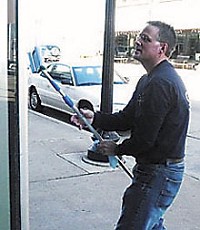 MICHAEL DINKINS cleans the windows of the L.A. Jennings Building on Saturday as part of the downtown New Castle spring cleanup. The event was organized by members of the New Castle Historic Preservation Commission. (C-T photo Craig Mauger)

With a broom in hand, Lee Grear battled cigarette butts and sand in downtown New Castle on Saturday.

Working on Broad Street, Grear, the owner of Offi-source, said improvements to the downtown benefit everyone, so everyone should pitch in.

On Saturday, Grear was one of about 35 people who tried to do their share by participating in a downtown spring cleanup organized by members of the New Castle Historic Preservation Commission.

Business owners and volunteers picked up trash, cleaned windows and swept sidewalks in an effort to revive the downtown for spring.

Scott Heavin of the preservation commission said the cleanup was a way for the commission to help downtown New Castle and show it is there to help the people who live and work there.

“I think we’ll make a difference,” Heavin said during the cleanup. “I would have liked to see more people obviously. But I think for the first time we’re going to get a lot accomplished.”

Michael Dinkins, owner of Solutions Unlimited, helped out by cleaning the windows of L.A. Jennings Building.

“I just want to see the downtown look better,” he said.

He said the downtown is like the heart of the city

“If you don’t sit there and keep your heart healthy, the whole body is going to just die,” Dinkins said.

Mayor Jim Small also worked on the Jennings Building, which is currently under renovation.

Small, who has made the downtown a focus of his administration, said if the downtown looks nice, the whole city does.

Of the cleanup and its volunteers, Small said, “It’s very rewarding to know that there are other people who care.” Gift-Giving Traditions Around The World

One of the most sincere and heartfelt things that a person can do is to give them a meaningful gift. Around the world, cultures each hold their own special traditions of gift-giving, for all kinds of reasons. For many cultures, it really is the thought that counts. In...

Join our Newsletter to get the latest technology news and special offers.